February 2010 marks the 100th birthday of the founding of the Boy Scouts of America. We congratulate the organization for its long record of channeling youthful male energy into impressive deeds.

Thanks to the Boy Scouts of America, there is a monument marking the hole-home of the assassin of Lincoln’s assassin. There are mini-Statues of Liberty scattered across the U.S.A.  The wealth of Boy Scout-created and -refurbished landmarks is partly due to a requirement of its Eagle scout candidates to conceive and lead a project that benefits their community. Old cemeteries get cleaned up, trails are cleared, signage is restored.

The latest impressive accomplishment is a monument — over 17 feet tall — celebrating the Scouts’ 100th anniversary. 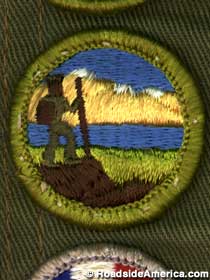 The monument is the project of 16-year-old Eagle Scout Tom Smith. It stands in his home town of Woods Cross, Utah. He convinced the same sculptor who made the Jinxed 9/11 Firefighters’ Memorial to create it.

According to the Davis County Clipper, Smith believes that his monument is “the most ambitious effort to memorialize the Scouting movement in the world” — and he appears to be correct (The actual home of Boy Scouts of America Troop #1, Pawhuska, Oklahoma, has kept a low profile). It’s a tall pedestal, inscribed with the Scout Oath and other uplifting sentiments, and topped with an oversized bronze Boy Scout wearing a Smoky Bear hat, leaning on a wood staff, and peering at the horizon over the edge of a precipice.

The supersized Scout’s gaze is eastward, toward the Wasatch National Forest. Perhaps he’s looking for wildlife on the mountain slopes, or mentally planning a gorge-spanning rope bridge to an obscure pioneer grave.