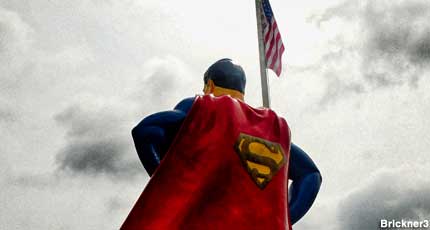 In August 2017, a rare total eclipse of the sun will slash across America, briefly tossing select tourist attractions into disturbing daytime darkness. But the rest of the 2017 Roadsider calendar lights up like an emergency flashlight of promising milestones and celebrations.

First, about that eclipse: on August 21st, spoiler clouds notwithstanding, it passes directly over Carhenge (celebrating its 30th birthday in 2017). However, the prime Roadsider view — longest in duration, maximum effect, landmark amusement — is to the east, at the Metropolis, Illinois Superman statue (or nearby overflow parking alternate: Big John).

This year will see the 10th birthday of the Creation Museum, the 20th birthday of City Museum, and the 70th birthday of Weeki Wachee (with its ageless mermaids and eternal problem blowing out candles underwater). 2017 will mark 125 years since Lizzie Borden‘s parents were whacked, 80 years since the Hindenburg crashed, and 70 years since aliens abducted Roswell‘s civic pride. And all of these are celebrated with top-rated on-site attractions that revere tourists. 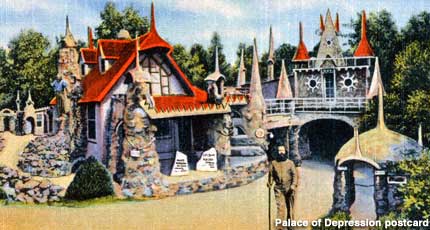 The Palace of Depression is expected to wrap up its decades-long resurrection of George Daynor’s swamp junk edifice. Giant cowboy Tex Randall‘s restoration will be complete. Travelers can expect to see the return of the mammoth Marilyn Monroe statue in Palm Springs, and possibly the Cursed Pillar in Augusta, Georgia (even though it was destroyed only last month).

Elvis died 40 years before 2017, but you’d never know it from the lines of fans who still wait to see his house. A new Elvis: The Experience attraction will open across the street from Graceland this year, supposedly the ultimate Elvis museum, its galleries stocked with one-of-a-kind relics from all of the other Elvis museums that have gradually closed under TCB thumb of the Presley estate. 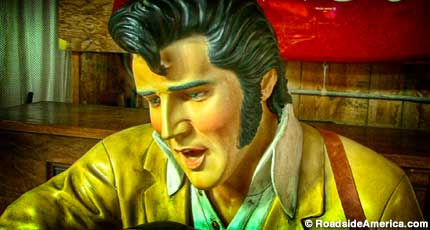 Other promising attractions scheduled to debut in 2017 include a 36-foot-tall stainless steel Superman statue in Cleveland; a Dr. Seuss Museum in Massachusetts; a memorial marking the spot where Salem hanged its witches; and something called “Gulliver’s Gate,” supposedly the world’s most elaborate indoor miniature world, currently being assembled in midtown New York City.

And, as with every new year, there will be yet unrevealed wonders, as was the case in 2016 with surprise standouts such as the Gettysburg Dime Museum, the Hugh Glass Bear Battle statue, and Expedition Bigfoot.

Finally, we look forward to the unveiling of the RoboCop statue in Detroit, as we have every year for the past six years. Kickstarters who funded this project in 2011 are probably kicking themselves by now – but the statue was sold with the promise that it would help spark Detroit’s renaissance. Our guess is that the eclipse marks 2017 as the chosen year.

Sections: Attraction News, Coming Soon Comments Off on 2017: Out of the Shadows