50 Years Of The Coin-Op Telescope

We missed the Golden Anniversary of the coin-op binocular in 1983, and we’re not sure how many people marked their calendars to celebrate 50 years of the coin-op telescope in 2011. But America’s tourists certainly should. 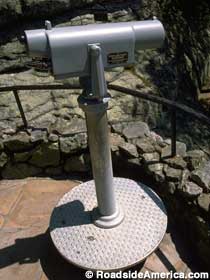 A familiar sight at places with something far away that people will pay to see up close, the “Mark I” telescope made its tourist attraction debut at Stone Mountain in Georgia, while its giant Confederate generals were still being blasted out of the mountainside. The Mark I’s wide field of view allowed users to take in the whole panorama, from the nose of Jeff Davis’s horse to the flapping cape of Stonewall Jackson. It also perhaps helped that the company that makes the telescope, SeeCoast, is based in the Deep South (Alabama), while the coin-op binocular is manufactured in Yankee Connecticut. (SeeCoast at first thought that its telescope would be used on long fishing piers, hence its name).

Although coin-op binoculars at some upscale destinations charge 50 cents for a two-minute peek, the humble Mark I has remained at 25 cents, and some attractions have SeeCoast telescopes that are free. The Mark I also tilts down further than its binocular rival, making it especially useful for overlooks at meteor craters and open pit mines, or if you want to spin around and magnify the shoes of other coin-op users.

Sections: Tourism News Comments Off on 50 Years Of The Coin-Op Telescope