Ten years is a long time. But is it long enough to merit a monument?

Within days of learning that the Census Bureau had anointed it the new Population Center of the U.S.A., the town announced that it would erect a permanent stone monument commemorating its centeredness. That’s no small feat for Plato, which the Census also determined had a population of only 109. 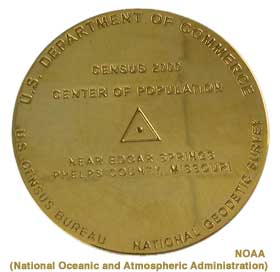 The always-shifting population center is locked down every ten years by the Census. It’s ephemeral, compared to other centers. As the U.S. population has slid southwest, its last four centers have all been in Missouri: 1980 Desoto, 1990 Steelville, 2000 Edgar Springs, 2010 Plato. Of the first three, only Steelville successfully solidified its ten-year claim with a monument (still visible in its town park). The 2000 winner, Edgar Springs, got by with a “Population Center of the United States” announcement attached to its green highway City Limits sign.

Unless Americans suddenly decide to stop fleeing the Northeast, Plato will be the population center for just the next ten years. However, the Center is not determined numerically; it’s the geographic point at which the U.S. would balance if each of its residents (currently 308.7 million) weighed the same. We’re not really sure if this would work, but if Plato could somehow convince everyone from now on who moves west of the Mississippi to lose a few pounds, it might maintain the current equilibrium. Plato’s monument might still mark the Center spot in 2020.

Hwy 32, Plato, MO
Directions:
South side of Hwy 32 next to a gazebo. It's a plaque on a upright block of Missouri red granite.