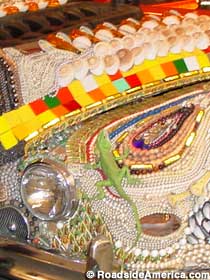 Over 250 cars will participate in a daffy display of unbridled creativity and colorful exhaust fumes. The Art Car Parade is one of those events where low budget, self-taught eccentricity reigns. It has a lot in common with other folk-and-funk festivities like the Coney Island Mermaid Parade, the Pasadena Doo Dah Parade, and that monster of all look-at-me-I’m-weird gatherings, Burning Man.

Kudos to The Orange Show for creating a world famous venue where women who are excessively fond of leopard skin print jumpsuits can proudly drive doll-and-denture-encrusted pickup trucks in hot sticky weather.

But did you know that there is a rival Art Car program that has been around even longer? BMW Art Cars go back to 1975, when French race car driver Hervé Poulain commissioned Alexander “Sandy” Calder to design the paint job for a BMW 3.0 CSL, which Poulain later drove at Le Mans. That particular model could reach a top speed of 181 miles-per-hour—as long as no one slowed down to wave to kiddies sporting bobble antennae or tried to eat a corn dog while steering.

It’s the ultra-slick, high-budget corporate version of Art Cars. Instead of seeking out obscure local artists with the patience to glue tens of thousands of rhinestones to a semi-rusted Chevy, BMW chooses blue chip stars like Rauschenberg and Hockney. Artists design on maquettes, then BMW provides brand new cars which are tastefully painted by hired hands. (Although back in 1979, Andy Warhol insisted on executing a charmingly sloppy paint job directly on his car in 23 minutes.)

We prefer the groovy grassroots vibe of the Houston Parade. Although, in these times of environmental awareness, we’ll give props to BMW for keeping their Art Cars off the street. Let’s admit it: Art Cars tend to be massive, old-fashioned gas guzzlers, weighed down by alligator heads and bejeweled hubcaps. By choosing to display their mint and pristine Art Cars in museums such as the Guggenheim and the Louvre, at least BMW is being fuel-efficient. [Post by Anne D. Bernstein]

Sections: Events Comments Off on Art Cars, High and Low