« Room With Askew: NYC Gravity Shack | Main | Gemini Giant Can Be Yours For A Giant Price »

It Pays To Ask Around (or: Hanging Tough on Hanging Rock)

In an age of GPS/mobile map convenience and on-demand attractions, travelers are occasionally hasty in advising us that an obscure sight is “Gone!” or “Not there!” It may well be gone, but it also might be behind a bush 50 ft. down the road, or dragged into a basement until the local tornado advisory is over. 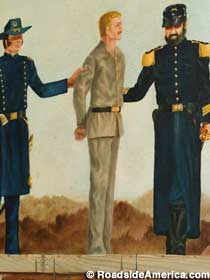 Sometimes we pull into a town to see a statue or monument or museum, and we can’t find it. That’s when a bit of sleuthing can pay off. We ask around. Most times it resolves our search, and sometimes it pays off better than we’d expected.

That happened on a recent visit to Pulaski, Tennessee. We’d heard there was an engraved rock that marked the spot where Sam Davis, “Boy Hero of the Confederacy,” had been hanged by merciless Yankees. But when we drove to the spot in town, no rock. Just a hole in the ground.

Had the rock been stolen? We didn’t know, but we’d just been to the Sam Davis statue outside the courthouse, and guessed that the courthouse would be a good place to Ask Around.

George was the guy. He said that the rock had been dug up a couple of years back and moved into the Sam Davis Museum (?!). The museum was only a block or two away. It was closed, but George had the key. Would we like to see it? Yes, please! 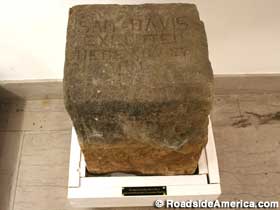 George told his co-workers that he’d be back in a little while, and we drove to the little museum — which turned out to have not only the rock, but also the leg irons that Davis wore to his execution, a collection of pro-Davis postcards and souvenirs, and several paintings of Davis by local admirers, including one of him on the scaffold. And, according to George, the rock formerly sat on the spot now occupied by the museum. It had been moved when the museum was built — so everyone who’s visited the rock in the past 60+ years hasn’t been at the hanging spot at all. But now we were, with the rock, in air conditioned, bug-free comfort.

None of which would have happened if we didn’t Ask Around.

It can be intimidating to ask a stranger for assistance in person — particularly when it involves something like a death site rock. But we’ve learned that the very bizarreness of our requests usually disarms whatever suspicion might otherwise exist, and that people are usually happy to help. Remember: they’re probably more scared of you than you are of them. After all, you’re the one who drove all the way out there to see something crazy.

One Response to “It Pays To Ask Around (or: Hanging Tough on Hanging Rock)”