« Rt. 66 Bus Arrives To Bewitch The Faithful | Main | Fame! Too Much of it is Killing Fireman Statue »

How We Almost Lost Our Atomic Marbles

Richland, Washington (Home of “The Bombers”), has never shied from showing pride in its nuclear heritage. But its loyalty was recently tested when the local museum stopped selling “atomic marbles” in its gift shop. There was fear that the iconic souvenir might be bought out by opportunistic profiteers. 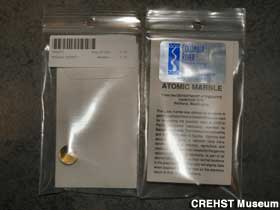 According to director Ellen Low of the CREHST Museum (Columbia River Exhibition of History, Science, and Technology), atomic marbles are made by lowering normal marbles into a tank with radioactive cobalt-60. Gamma radiation kicks around the marbles’ electrons and changes their clear glass to a honey brown/gold color (Hint: the longer the exposure, the darker the marble). For years the museum sold the marbles out of a gumball machine, then later in single packages. “We thought that the machine might be a little bit dangerous because small children might mistake them for gum,” said Ellen.

One museum employee started using the marbles to make necklaces and earrings. The jewelry was sold in the gift shop along with the single marbles. Then one day a young woman came in, saw that the marbles were sold cheaply compared to the jewelry, and bought a lot of marbles. She said that she would use them to make and sell the same kind of atomic accessories herself.

Protective of its employee, concerned that its marble supply might be exhausted by bulk-purchase nuclear entrepreneurs, the museum stopped selling its single marbles. The only way for tourists to purchase the marbles was to buy the necklaces and earrings. “It was Marble Wars,” said Ellen.

But the public was displeased. Phone calls were received, according to Ellen. The local newspaper weighed in with an editorial. “We listened to what they had to say,” Ellen said, and the museum crafted a compromise: it has resumed sales of individual atomic marbles, but will limit them to two per person. “Nobody’s gonna buy more than a couple for personal consumption,” said Ellen. “It keeps everybody happy.”

Sections: Attraction News, Souvenirs Comments Off on How We Almost Lost Our Atomic Marbles