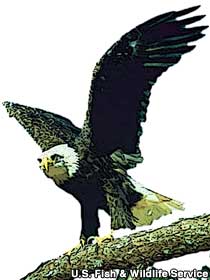 The mascot of Florida’s Hillsborough Community College is the hawk. The campus newspaper, sports teams, e-mail accounts, all have “hawk” somewhere in their titles. It seemed reasonable that the college would want a hawk statue, and it recently spent a reported $28,000 to erect a large one outside of the library on its Plant City campus.

The statue is big and impressive, with towering, upraised wings and a no-nonsense expression. Definitely worth 28 grand. But what really makes it a bit odd is that it isn’t a hawk at all. It’s a bald eagle. 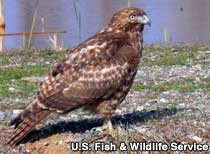 Some students have noticed this discrepancy. We are not ornithologists, or birdwatchers, or even very observant when it comes to the Natural World. But we’ve seen hawks and bald eagles together in “Birds of Prey” shows at attractions like Jungle Island, and we can tell you that Hillsborough Community College has got itself a bald eagle instead of a hawk.

This is not necessarily a bad thing for the students of Plant City. Bald eagles are bigger and make for much better statues (and more fearsome mascots). And it seems to be part of a pattern. For some reason, especially on college campuses, hawks just don’t get any respect.

Wagner Rd, Wilmington, NC
Directions:
Take I-40 south until it ends in Wilmington. Continue on US 117/N. College Rd for three miles. Turn left onto Randall Drive and enter the University of North Carolina campus, then take the first right onto Wagner Rd. The statue will be straight ahead, in the middle of a traffic circle.