Tourist Attractions Given Secret “Heads Up” on Prez Obama? 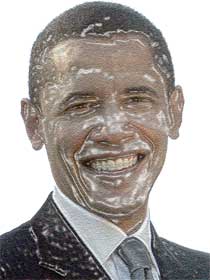 We were talking on Tuesday afternoon — Election Day — to David Adickes, sculptor of big President heads, to find out when his third Presidents Park would open (It’s been delayed a year, but it should open in 2009, and President heads are already there to look at). The conversation drifted to the Presidents Park in Virginia, and the reported threat that it faces from Wal-Mart, which wants its land.

David, who will soon turn 82, has pledged to sculpt one last head for all three parks: the winner of the 2008 Presidential race. “They e-mailed me yesterday,” he said of the Virginia park. “To see if I wanted to do Obama.”

They apparently knew that Obama would be President the day before the election. How is that possible? 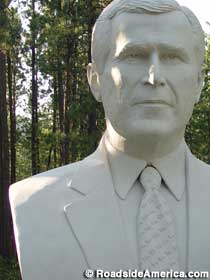 Do tourist attractions have a secret conduit to the nation’s movers and power brokers? Could the folks in Virginia, which is just across the river from DC, have overheard that the fix was in from some season’s pass-toting super-tourist, and then pre-ordered with Adickes to beat the Big Obama Head Rush?

We called South Dakota’s National Presidential Wax Museum Tuesday afternoon, and they told us they hadn’t ordered an Obama yet, and would wait until a clear winner is declared. “We can’t afford to make a mistake,” said operations manager Karen Miller. “Wax models start at $10,000 dollars.” A new wax President takes three months to complete — so whoever he is can be installed in the new diorama by the Inauguration or soon after.

In other words, you want to start as early as possible, and you don’t want to order the wrong head.

David Adickes’ final President’s head will definitely be ready in time for the 2009 tourist season. “I’ll be starting on it tomorrow,” he told us — a wise move. Maintain the illusion of democracy, and everyone goes home happy….

One Response to “Tourist Attractions Given Secret “Heads Up” on Prez Obama?”