The next time that someone tells you that newspapers are irrelevant in the Digital Age, tell them that a newspaper just saved The Banana Museum.

In March 2010 it was revealed that Ken Bannister’s Banana Museum in Hesperia, California, was closing. Its vast collection of bananabilia was for sale on eBay. There were no buyers. 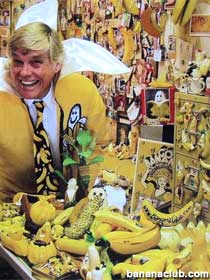 Then a woman named Virginia Garbutt read about it on the front page of the Riverside Press-Enterprise. “I thought, hey, that would be fun thing to do, have a banana museum,” said Virginia. The Garbutt family owns a liquor store named Skip’s in North Shore, a desert hamlet at the edge of the Salton Sea, “out in the middle of nowhere,” according to Virginia. “What if we put it down there and added to it? Maybe people would want to stop just because it’s crazy.”

And so the Garbutt family bought the banana museum.

Virginia and her son, Fred, have big plans. The museum will have its own building next to the liquor store, painted yellow, with a banana-shaped sign and possibly a banana car parked outside. It’s right along California Hwy 111, which Virginia said was a popular route for people visiting Shield’s Date Garden and Salvation Mountain. “We’re just gonna ‘add to the bunch’,” said Virginia, who already had her banana puns down pat. “We’re gonna redo everything out there to make it look ‘a-peeling’.”

The museum will have to wait until the current tenant’s lease expires later this year, but Virginia expects it to be open by January or February of 2011. “It’s gonna happen, believe me,” she said. When we asked if North Shore had ever even seen a banana before, she laughed. “No, there are no bananas there. But there were no bananas in Hesperia. Who cares!”