It was an event worthy of hoopla and ballyhoo: a rare tornado, sweeping through Bridgeport, Connecticut, on June 24. No one died (and so there will probably be no evocative monument to it) but the storm did major damage to a number of downtown buildings — including the P.T. Barnum Museum. And the P.T. Barnum Museum had on display an Egyptian mummy, a stuffed elephant, and a replica of the original FeeJee Mermaid, matriarch of America’s famous Mermen. 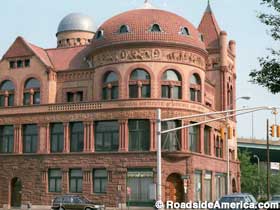 We spoke with the office manager of the museum, who assured us the Mermaid was safe (“It was in a glass case”). The Mummy and elephant also weathered the storm, although the latter was peppered with debris that will need to be brushed off. That, however, will be no easy task, since air quality tests now show elevated levels of lead inside the museum. In addition to the vacuuming and the drying-out and tweezering of glass shards from the exhibits, they will also have to be detoxified, and the museum has applied for funds from the Federal Emergency Management Agency to help defray the cost.

The office manager didn’t know how long it would take, but reported estimates of the clean-up now stretch from four to six months. Until then, FeeJee Mermaid fans will have to travel elsewhere — perhaps to one of New England’s other monster destinations.

820 Main St., Bridgeport, CT
Directions:
Exit 27 off I-95. Take Lafayette Blvd. Right onto State St. then right onto Main St. From I-95 heading South: Take Exit 27 (Lafayette Boulevard) turn right at the end of the ramp. At the 3rd stop light, turn right onto State Street. Continue to 2nd light (Main Street), turn right on to Main. Museum is one block down on the left. Entry is at the left rear of the historic building (which is closed for tornado damage repairs).
Hours:
Th-F 11-3 (Call to verify)
Phone:
203-331-1104
Admission:
Free
Status:
In Transition