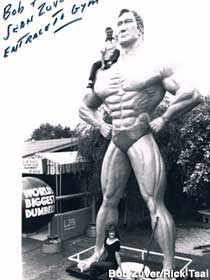 Schwarzenegger was once a Mr. World, but even in his prime he was no match for Zuverman.

Zuverman was a colossal version of Bob Zuver, bodybuilder and proprietor of Zuver’s Fitness Center at Muscle Beach, California. Built in 1968, he was 18 feet tall with six-foot biceps and eight-pack abs (The body may have been exaggerated, but the head was a faithful copy of Bob’s).

A plaque next to Zuverman listed his vital stats, and claimed that a flesh-and-blood version would eat 16 eggs for breakfast and a 10-pound steak for dinner. 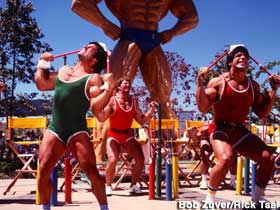 Zuverman stood outside the gym as a photo-op along with the World’s Biggest Dumbbell, which Bob had made from a pair of old marine buoys.

Muscle Beach’s popularity waned in the 1980s, and Zuverman was bought by George Comalli, a Zuver fan and fitness buff. He trucked the beefy goliath to Portland, Oregon, painted him gold, and stood him on the roof of his business, Giant’s Gym.

The city declared that Zuverman violated its signage codes, so George moved him indoors and stood him among the weight machines, his head invisible up near the roofline. Separated from his identity, Zuverman became simply “He-Man.” 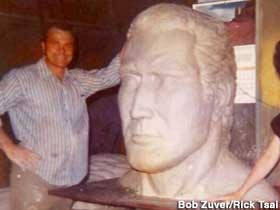 Enter Rick Tsai, another gym owner, from Darlington, Pennsylvania. Rick, like George, was a bodybuilding history buff, but Rick had a gym with outdoor property. Rick struck a deal with George, and in March 2013 he rented a truck, picked up Zuverman, and drove him cross-country, through two blizzards, to his new home.

The statue was so big that one of its brawny arms had to be sawed off to get it into the truck.

Rick is a long-time fan of RoadsideAmerica.com and, like the now deceased Bob Zuver, understands the value of standing an 18-foot-tall muscleman outside his gym. He told us that Darlington, unlike Portland, approves of Zuverman’s outdoor display. He said he will reproduce the original Zuverman plaque to once again give the giant an identity and a name. 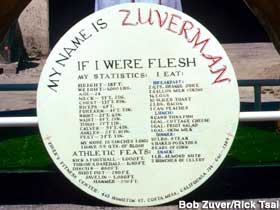 Rick expects to have Zuverman up on a concrete pedestal, “better than new,” by July 4.

“He’s gonna be here until I get old and somebody else takes him,” said Rick, who is excited that passers-by will once again be able to pose for photos next to Zuverman. “Why did I do this? I don’t know; I guess I really wanted him,” Rick said. “He’s really big!”

3602 Darlington Rd, Darlington, PA
Directions:
From downtown Darlington drive west on 2nd St./Darlington Rd for a half-mile. Zuverman will be on the right, ouside Brickyard Gym and Blackhawk Chiropractic, just past the fire department.
Admission:
Free
RA Rates:
Worth a Detour