The world’s most expensive tumbleweed has been unveiled in Chandler, Arizona. 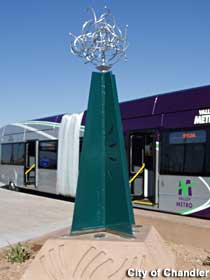 Created at a cost of $100,000, “Momentum” is perched atop a ten-foot pedestal in the city’s new Park-and-Ride lot.  Critics have quickly labeled it “rat’s nest” and “hairball.”

“I would have thought it would have been bigger,” said Jeff Weninger, the only current member of Chandler’s city counsel to vote against the sculpture when it was approved two years ago.  “You just gotta look at it and say, ‘Is that really worth $100,000, or $120,000, or however much it cost?'”

(To be fair, the artwork also includes a couple of concrete walls with patterns cut out of them.  But its main expense has always been the tumbleweed — a tribute to the Park-and-Ride’s neighbor, Tumbleweed Park.)

Chandler should have their own attraction to complement nearby Rawhide, a fake wild west town owned by the Gila Indian Reservation.  And we have no problem with a town spending $100,000 on a tumbleweed.  But we imagined something approaching the scale of the Unisphere or the proposed massive orange spiky thing in Miami, Florida. Not a shrimpy metal art thing, smaller than tumbleweeds that have hit our own cars when we’re on western highways….