In the heyday of Isis and Ra, obelisks were hot. Their pizazz has cooled over the last few millennia, but they’re still occasionally erected to honor someone extra-special or add cryptic counterpoint to another landmark — say, a humongous piece of fruit. 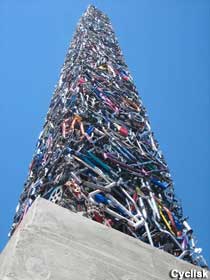 The latest unusual expression in this grizzled architectural form is in Santa Rosa, California: the Cyclisk, an obelisk made of the gears, rims, frames, and other loose parts of 330 junker bicycles.

Cyclisk is large. So large, in fact — 65 feet tall — that its two creators reportedly chose not to get paid for it, so they could make it bigger. “We wanted to give the city a landmark,” sculptors Mark Grieve and Ilana Spector told the Santa Rosa Press Democrat.

Like the obelisks of old, the impressive Cyclisk has been built to last — possibly for centuries — and the city reportedly feels that it will show Santa Rosa to be both cultural and bike-friendly.

This is in stark contrast to another fused amalgam art form seen in other cities — the melted gun sculpture — which delivers an anti-gun/anti-violence message. If only all the guns were melted.

In California, where bicyclists expect respect and deference by traffic that is rare or non-existent in most other states, a similar fantasy might occur to a few internal combustionists: “If only all the bicycles were melted. Then I wouldn’t have this helmeted diva shrieking profanities at me because I stopped in the bike lane to make a right turn….”

Perhaps we also need an obelisk of melted cars?