Big Apple’s Big Boat Is Back 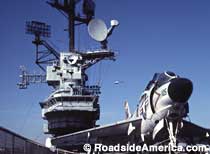 New York City gets back its aircraft carrier, nuclear missile submarine, and supersonic passenger plane on November 8 when the Intrepid Sea, Air, and Space Museum re-opens after two years of repair.

The floating museum offers a technology mash-up that isn’t available anywhere else. The U.S.S. Intrepid is a World War II carrier packed with vintage aircraft, including replicas of the Mercury and Gemini capsules that it fished out of the ocean in the 1960s (the “space” part of the museum). The U.S.S. Growler is a 1950s sub, and the only sub open to the public that carried nuclear missiles (although it wasn’t nuclear-powered like other tourist subs). We’re not quite sure what the 1970s supersonic Concorde is doing here, except that it’s a convenient place to display it.

The Intrepid was known in its active duty days as the “Decrepit” and the “Evil I” for its knack of getting damaged. This trend seems to have continued and even worsened into its retirement. The carrier got stuck in the mud when attempts were made to tow it to New Jersey for repairs. Then the Concorde had its nose knocked off. Then the Growler, which was supposed to reopen for tours along with everything else, was found to have holes in its hull. It will need an extra $1 million to repair it, and will remain an outside-only attraction until Spring 2009.

Sections: Attraction News Comments Off on Big Apple’s Big Boat Is Back