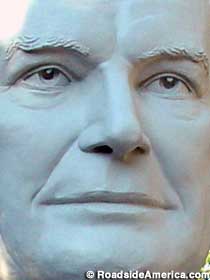 We’d seen Big Ike before — or one identical to it — with a number of other equally large President heads in Houston, Texas. Now America’s 34th President’s head is in the town of Denison near the Oklahoma border, as a new monument to Denison’s most famous son.

Artist David Adickes, who created big heads of every American President for a failed attraction in Houston, is reportedly selling the oversize noggins to places like Denison. (Two other complete sets of heads are at currently closed attractions in South Dakota and Virginia). David is probably happy to see his heads go to homes where they’ll have a personal bond. The availability of a big President head could be a once-in-a-lifetime opportunity for a town such as Kinderhook, New York, which is better known for its chain dinosaur than as the birthplace of Martin Van Buren (President #8). And the current home town tribute to Rutherford B. Hayes (President #19) in Delaware, OH, could really use a giant head to add some razzle-dazzle.

Adickes is in his mid-eighties, and his big head dispersal suggests that he’s moved on, artistically, from giant Presidents. But if he’d like a similar challenge, he might find willing customers in Plattsburg, Missouri (home of President-for-a-day David Atchison) and Williamsfield, Ohio (adopted home town of disputed President #1 John Hanson).

We want you to keep those President heads coming, David!

Loy Lake Rd, Denison, TX
Directions:
Southwest of town. US Hwy 75 exit 67, on the west side, at the entrance to Loy Lake Park.