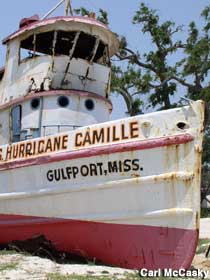 Monster hurricanes scour the landscape, leaving behind a lot less than when they arrived. This can be frustrating if you want to visit attractions along a southern shoreline, unless the attraction is a memorial to a hurricane.

Katrina in 2005 was especially brutal, taking with it Moran’s Art Studio and a giant rocking chair and even the S.S. Hurricane Camille, a boat named for an earlier, slightly less powerful storm that it had survived (Confederate President Jefferson Davis’s home was nearly obliterated as well, but Rebel sentiment and money brought it back to life).

The bad record of big storms may be changing, however, as Americans realize that celebrity-hurricane wreckage can be turned into something postcard-worthy.

According to the Galveston County Daily News, the median of US 90 through lower Mississippi now has 20 “marine-themed” sculptures carved from trees killed by Katrina. The News calls them “one of the state’s top tourist attractions,” and their popularity is spurring Galveston, Texas, to create a half-dozen of their own Catastrophe Trees, left over from the 2008 visit of Hurricane Ike.

Ike’s legacy extends all the way to Racine, Wisconsin, where a sculptor has taken the remains of five of his Galveston statues, all destroyed in the storm, and turned them into a new piece of Racine public art. According to the Racine Journal-Times, the artist described the sculpture as “very representative of the chaos that was going on in my life,” and titled it “The Last of Ike” — although that may be premature, given the piles of storm debris that have yet to be re-purposed.

One Response to “Big Storm Bounty Reaps The Whirlwind”