Bigfoot And The Dinosaurs: Past Pals?

Most year-end Top Ten Lists are predictable. But item number six in the Mineral Wells Index’s roundup of 2008 caught our attention:

“One day during the summer, former Mineral Wells resident Alvis Delk … said he and his close friend, James Bishop, had recovered a piece of limestone near Glen Rose that, upon recent cleaning, revealed footprints of a human and a dinosaur, and that the prints intersected.” 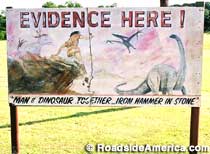 The newspaper correctly points out that the overlapping prints “would overturn some very principal theories of evolution.” It goes on to say that Delk sold the stone to Carl Baugh, director of the nearby Creation Evidence Museum, who took the rock to two different hospitals for CAT scans and sent slices to an unnamed lab for analysis. Said Baugh: “We will continue working until the total truth is demonstrated.”

The newspaper fails to mention the size of the footprints, but Carl Baugh’s interest over the years has been on giant footprints — this being consistent with his literal reading of the biblical book of Genesis. Has Baugh stepped into something much more interesting than dinosaurs and humans? Maybe he should scan these footprints as well….

Sections: Attraction News Comments Off on Bigfoot And The Dinosaurs: Past Pals?