« William McKinley: Imperialist In The Crosshairs | Main | Queen of the Air »

Binocular Viewers: The Better To See You With 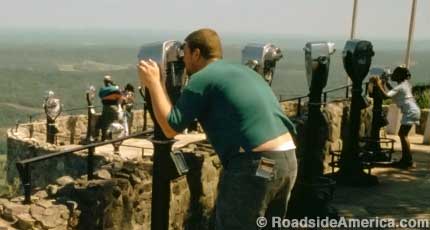 They’re called “Scenic Viewers” by some. The man who runs the company that builds the devices calls them “Binocular Viewing Machines.” They don’t have an official name, but they’re instantly recognizable to anyone who’s been on a scenic road trip.

Their design is as distinctive as the Coke bottle, and the oval shape of their face plate is eerily similar to the head of the Flatwoods Monster.

The Viewers were invented by the Tower Optical Company, which began placing them at tourist attractions in 1933. Made of bronze and cast iron, weighing over 300 pounds each, they’re built to survive extreme weather and clambering kids with a minimum of maintenance. They have no electronics, because many of their locations have no power. 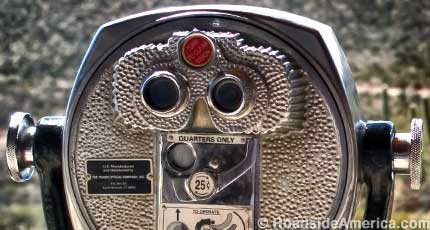 We spoke with Greg Rising, who runs Tower Optical, started by his great-grandfather. He told us that well over 2,000 of the Viewers are scattered across the U.S., usually in places with a long vistas that make people want to peer at things far away, such as the rim of the Grand Canyon or the observation deck of the Empire State Building.

“We’ve kept changes to a minimum,” Greg said, with the oldest and newest Viewers virtually indistinguishable from each other. The only way to date a machine is to look at the serial number stamped into its face; the lower the number, the older the Viewer. “I have machines in the very low numbers still in service,” Greg said, “built in the 1930s.” Most of the oldest machines are in the company’s home state of Connecticut, he said, but machines get moved, some get lost, and the only way to know for sure is to check the number. 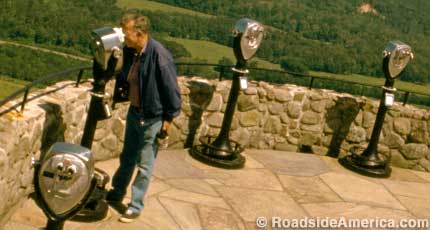 We asked Greg if the Tower Optical Company gave factory tours. He laughed. The answer was No, and the idea that his Viewers might now be considered attractions themselves hadn’t occurred to him, although he said he had occasionally received queries from people wanting to know the location of a nearby Viewer, so they could take a picture of it.

Sections: Road Trips, Trends Comments Off on Binocular Viewers: The Better To See You With