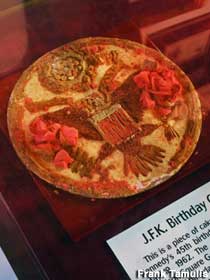 For many years the most memorable piece of Presidential confectionery on public view has been a slab of Grover Cleveland’s wedding cake, a brick-like bit of eye candy for those who visited his birthplace in Caldwell, New Jersey.

King cake? Not any longer.

Wayne Lensing, who’s amassed an enviable collection of one-of-a-kind items at his Historic Auto Attractions museum in Roscoe, Illinois, has just put on display his latest prize: the edible Presidential Seal that topped John F. Kennedy’s 45th birthday cake. This was the cake that was given to JFK while Marilyn Monroe breathlessly sang, “Happy birthday, Mr. President,” for the newsreel cameras.

Wayne posed for the cameras himself, eating a piece of the 50-year-old cake for a local news broadcast. “Mmmm,” he said, smiling. “It’s still good!” 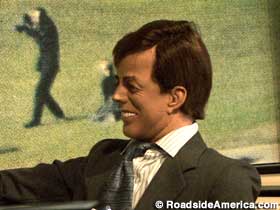 The cake has been in Wayne’s possession for years, but he restrained himself from eating it until exactly five decades after Kennedy did on May 19, 1962 (The public cake event took place ten days before JFK’s actual birthday). Wayne then immediately placed the cake on permanent public display in his museum, alongside other Camelot-era treasures such as Ham the Astrochimp‘s space couch and Lee Harvey Oswald’s original tombstone.

FYI when you visit: the spot under the eagle’s tail is where Wayne took his bite.