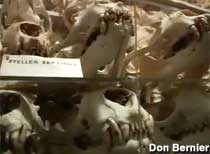 Filmmaker Don Bernier (who we first met when he created 2004’s In a Nutshell, about the Nut Lady) has a new short video documentary — Shelf Life — featuring Raymond “Bones” Bandar, who has collected 7,000 skulls, mostly marine mammals. Retired high school teacher Bandar has packed his San Francisco home with specimens. According to Don: “His wife of 50 years, artist Alkmene Bandar, has only one rule: no skulls in the bedroom.” Shelf Life premieres at the 51st San Francisco International Film Festival on April 27, with another showing on April 30, 2008.