The Kuyper Cake Collection has risen once again! The quaint display of 150 examples of the decorative dessert arts has been displaced many times since Francis Kuyper established the initial exhibit in her Pasadena garage in 1994. Kuyper, a former vaudevillian (she was one of “The Singing Schultz Sisters”), was an expert cake decorator praised for her innovative and skillful wielding of the airbrush—the collection includes cakes topped with her delicately detailed portraits of such icons as Lucille Ball, Lady Di and Oprah Winfrey. Now the traveling treats are settling down, becoming part of the “Sugar Gallery” at The Southern Food and Beverage Museum in New Orleans. 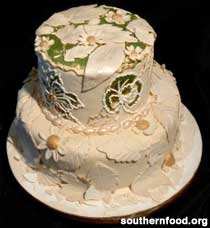 It all began when Kuyper started hosting cake decorating classes in her home. After icing instruction was done, she saved each example of confection perfection. (Actually, the cakes are not edible; the decorative work was done on plastic or Styrofoam forms.) Francis and her husband, Frankie, then spent $40,000 converting space in a building next door into a compact museum with an easy commute for its curator.

When the couple moved to a retirement home her collection went with them. The Hollenbeck Palms made space for the cakes in a small room in the basement. Kuyper continued to receive visitors and pontificate upon proper “piping” for twelve years, until her death in 2010 at age 92.

The desserts were destined for the dumpster until a teacher at a nearby vocational school stepped in. Susan Holtz, who had taken her culinary students on many field trips to the sweet subterranean destination, was quick to take possession of the endangered edibles and transferred them by the end of that summer. But this solution was only temporary; budget cuts in the Los Angeles School District threatened to derail plans for installation. Cake booster were once again whipped up into a frenzy.

Until Lisa Williams, Director of the Southern Food and Beverage Museum, decided that the Kuyper cakes would fit right in with other SoFab exhibits like “The Story of Coffee”, “Southern Likker” and “Corn in America”.

Now installed in the museum’s accessible location on Riverwalk, an opening reception is planned for November 10th from 4-6 PM. Cake and bubbly will be served. If you can’t make it you can view many of the most imaginative (and weird) examples remotely on the museum website.

Although they are now part of a permanent collection, that doesn’t mean that the cakes will stay put for long. They will continue on their peripatetic path when the entire museum picks up and relocates to a new home on O.C. Haley Boulevard in 2013.