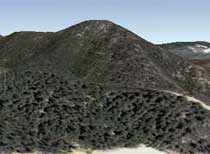 Arman owns the mountaintop Iron Mountain Mine outside of Redding, California, and he plans to erect his mega-Messiah 3,500 feet above the Sacramento Valley. “I have the perfect location for it,” he told us. “You’ll see it from 100 miles away.”

Ted got the idea, he said, when Redding built its “Sundial Bridge,” a futuristic suspension structure. “People come from all over the world to see it,” he said, “but it’s just a piece of steel sticking up into the air!” To add to this perceived injustice, Ted recalled that he was reading his local paper “and it said that there was more attention paid to the Golden Arches, selling hamburgers, than there was to churches.” Ted was appalled, and realized at that moment that “I have the most perfect location to do something for our lord Jesus Christ.”

His plans are bold. Ted wants to build his giant Christian champion not of concrete or steel but of white Carrera marble. It will be floodlit at night and accessible to the public by a 7.5-mile-long road that winds through the 3,000 vertical feet of mountain he owns, which he plans to transform into a “Garden of Eden.” The statue should be up in three years, he told us; the Garden will be complete in five.

Arman, who is 86, says that his age in no way dictates his schedule. He expects to live to be 120. “That’s what the Bible says, and I don’t know why I shouldn’t follow that rule.”

Building the World’s Largest Jesus and a Garden of Eden in just five years may seem fanciful, but Arman says that he has global support and the cash to make it happen. “The more expensive it is, the better I like it,” he told us. “When we started out, I was told it would cost maybe $35-40 million. Then somebody said, ‘Make it $60 million, Ted.’ And I said, ‘Okay!’ Cost is not an issue here. Because we’re dealing with the WORLD. We’re dealing with the ENTIRE WORLD.”

Ted says that his iron mine is the tenth largest on the planet, and that “just my property and ore value is over $5 billion.” So funding really does seem to be no obstacle to this project. But there are naysayers. The EPA, for example, claims that Ted’s mine is currently non-producing, that it’s a toxic Superfund site, and that when it does reopen it will cost twice as much to extract anything out of it as its metals are worth.

But Ted is not worried.

“The bigger the battle, the better I like it,” he told us. “Samson — you know what he did when he got between those two pillars? The Lord was on his side, and when the Lord is on your side, you’d better back away.”