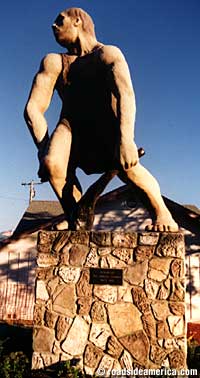 We tracked reports of the Independence Day incineration of the Grants Pass Caveman back in 2004, and followed up on his eventual, better-than-ever resurrection. But an article in the Rouge River Press sets out new details about John Stripling, the man who saved the statue, which grabbed our attention like a Neanderthal grabbing at a flame.

Stripling, a fiberglass manufacturer, moved to southern Oregon in 2001 after an automobile accident had left him severely crippled. When he learned of the torching of the Caveman, he “was overcome with compassion and frustration,” according to the story. His emotions only increased when he learned that there was money available to fix the statue, but that no one was willing or able to do the work.

“I got down on my hands and knees and prayed so hard, for hours, I broke out in a sweat with uncontrollable tears streaming down my face,” said Stripling. “When I woke up the next morning, I was able to stand up and walk for the first time in years.” Within days, Stripling was in contact with the Chamber of Commerce and the Caveman Club, accepting the job of repairing the city mascot.

Perhaps the role of roadside statues as miracle lightning rods isn’t unusual, merely underreported. Our fiberglass totems are, after all, often the focus of great affection, and frequently the tallest thing around.