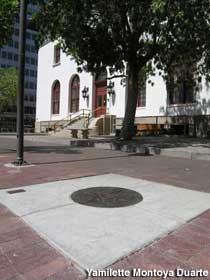 Finding the exact center of a city — an unevenly shaped blob — can be a headache. But in late 2010 Cliff Wilkie, a geodetic surveyor, took on the challenge of finding the exact center of his home city of Albuquerque, the biggest in New Mexico, and he succeeded (Cliff was inspired by a column in the Albuquerque Journal written by Leslie Linthicum, a big fan of centers, as are others).

Cliff’s effort so impressed the Albuquerque Public Art Program that it launched “Center of the City Project,” a competition to design a suitable marker for not only the 2012 center (which actually is the 2010 center, but there was no change of land parcels in the interim), but the 1912 center as well (which was much easier to pinpoint, since the city had been much smaller then). 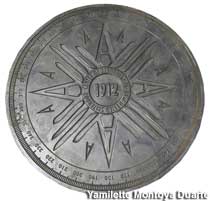 The artist who won the design competition was Yamilette Montoya Duarte from San Miguel. She normally painted murals. But, combining the essence of a compass and a bull’s eye, she created two nearly identical markers that resembled manhole covers, incorporating the letter A (for Albuquerque) and a Pueblo Indian Zia symbol. One is embossed, “1912 – Center of Albuquerque – New Mexico Statehood” and the other, “2012 – Center of Albuquerque – New Mexico Centennial.”

The discs were forged in iron at New Mexico Highlands University. In a poetic flourish, a few old and broken Albuquerque manhole covers were tossed into the melting pot. 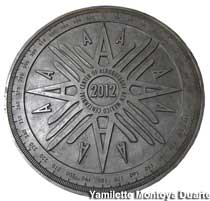 The markers were unveiled in June 2012, set flush with the ground just like real manhole covers. For safety reasons they weren’t set into the street, but into wide sidewalks. Visitors won’t have to run into traffic to experience the center. And without traffic driving on top of them, the markers will last a lot longer — possibly until the New Mexico bicentennial in 2112.

Sections: Attraction News Comments Off on Centered in Albuquerque: 1912 vs. 2012

4th St. SW, Albuquerque, NM
Directions:
Downtown. On the west side of 4th St. SW (the old Camino Real) midway between Central Ave. NW/Route 66 to the north and Gold Ave. SW to the south.