Winds Of Change For Simpson’s Whirligigs 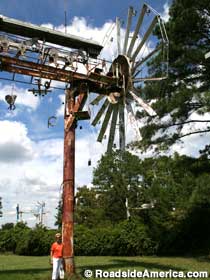 For decades, handyman Vollis Simpson has been making giant “whirligigs” — home-built junk-art contraptions designed to spin in the wind — and mounting them on poles in a field next to his home in Lucama, North Carolina. He’s adored as an “outsider artist,” his creations exhibited in museums as important American folk art.

But Simpson is 91. We visited with him at his workshop in 2005, soon after he’d been injured (a hot piece of metal he was welding had jumped down his shirt, causing him to pass out and break his teeth on the ground). Since then, we’ve been receiving tips on the overgrowth in his yard, and his injuries from building whirligigs, some of which weigh multiple tons.

Now it appears that the whirligig has turned. The neighboring town of Wilson — the county seat — has announced that it plans to purchase many of Simpson’s creations and move them to a nearby park, which it expects to open in November 2012. 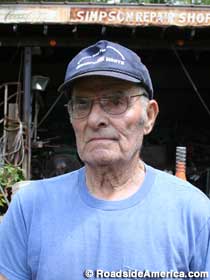 The move makes sense. Simpson, a famously stubborn DIY guy, perhaps considered what happened to Lester Gay’s Whirligig Farm on the other side of Wilson, and wanted a better future for his creations. He and his wife Jean agreed to the sale.

Wilson’s director of development, according to a story in the Raleigh-Durham News and Observer, feels that the arrival of Simpson’s whirligigs “will add to the area’s global competitiveness.” That’s definitely true. Simpson’s massive creations will run circles around Emil Gehrke’s Windmill Park in Electric City, Washington, and even the Bomb Whirligigs of Hawthorne, Nevada.

The town has reportedly promised Simpson that he can continue to maintain, repair, and modify his whirligigs as long as he likes.

(Thanks to Dean Jeffrey for the news link.)

3 Responses to “Winds Of Change For Simpson’s Whirligigs”