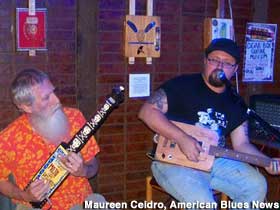 The world’s first Cigar Box Museum is now located in the 77-year-old Speal’s Tavern in New Alexandria, Pennsylvania. The display of over 35 inventive handmade instruments lines the walls of this bar and live music venue, turning it into a small town, down-home, single-minded Hard Rock Cafe.

The guy with the box moxie is blues musician Shane Speal, whose father, Dan, is the tavern manager and represents the third generation of Speals to barkeep in this location. Shane has a passion for this particular format for picking, having built his first cigar box guitar in 1993 and later establishing the top cyberhub for enthusiasts, CigarBoxNation, which currently has an international membership of 4,000.

Used in many “old time” American musical genres from Mississippi Delta Blues to Yiddish vaudeville (even Jimi Hendrix was known to play one) the popularity of this accessible instrument has surged in recent years, along with other recession-friendly modest music makers like the washboard, ukulele, jug, and washtub bass. 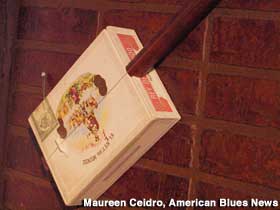 Cigar Box Guitars are simple to make from nearly-free household materials. The basic version requires just one box, a stick, and some bailing wire. At Speal’s Tavern, the specimens range from a 100-year-old one-stringer to a double-neck electrified version.

Over in Dingman Township, New Jersey, a more ambitious guitar-themed museum is in the works. Don Oriolo (son of Felix the Cat animated cartoon producer Joe Oriolo) has plans to build a combination working guitar factory and tourist attraction. An artist’s rendering of his proposal looks like a cross between an Adirondack lodge and a modernist greenhouse, with the entryway beckoning visitors to strut right on through a giant guitar’s sound hole to enter.

Oriolo is a musician and composer whose accomplishments include writing the first song to ever be recorded by Jon Bon Jovi and singing lead vocals on the famous “Coke Adds Life” advertising jingle. His factory would house a Felix the Cat Museum, and the plucky feline will adorn many of the models produced there. Oriolo has his eye on a 44-acre plot of land on Route 6 and hopes to begin construction in the spring of 2011.

We hope it all goes all Righty-O!