Colossal Kissers Back in Sarasota 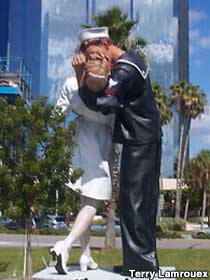 Those who follow the sometimes-elusive Muffler Men know that roadside giants sometimes shift locations. But 26-foot-tall statues are rarely as mobile as “Unconditional Surrender,” an over-sized depiction of a sailor embracing a nurse at the end of World War II. The public spooners were in Sarasota, Florida, in 2005, then moved 3,000 miles to San Diego, California, in 2006. Now they’ve returned east to Sarasota, and this time their Florida fans hope that it’s for keeps.

According to a brief report on Sarasota’s WWSB, the statue is back “by popular demand.” It is in fact a new and improved version of the statue, made of aluminum instead of fiberglass, “able to withstand winds from a category 3 hurricane.” It’s only committed to stay here through the winter months, however; if the city wants it forever, Sarasota will have to fork over $700,000.

Art critics hated Unconditional Surrender when it first appeared in Sarasota, and hated it in San Diego too. But the public loves to imitate the big smoochers wherever they appear — and when was the last time America won a war where the outcome was a free-for-all of lip-locking complete strangers?

Sections: Attraction News, Statues Comments Off on Colossal Kissers Back in Sarasota

2 Marina Plaza, Sarasota, FL
Directions:
In Bayfront Park on the Bay side of US-41/Bayfront Drive, midway between Main St. and Ringling Blvd.
RA Rates:
Worth a Detour