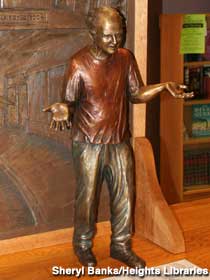 A fitting tribute to Cleveland’s beloved bookish working class hero and uber-urban graphic novelist Harvey Pekar was unveiled in October at the Cleveland Heights-University Heights public library branch on Lee Road. The “interactive memorial” consists of a 2.5-foot-tall bronze statue of Pekar (designed by local sculptor Justin Coulter) stepping out of a comic book page, gesturing with a characteristic shrug and exclaiming, “Oy vey, what do you want from my life?” The page posits that anyone’s life can be the basis for art. And in the series American Splendor Pekar brilliantly turned the minutia of his own everyday experience into a compelling and lasting body of work.

The memorial is also practical. The statue sits upon a usable wooden desk. The desk is stocked at all times with paper, pencils and other art supplies so that visitors can create comics of their own. In addition, the reverse of the comic book page is made of slate, which is divided into panels, so that anyone can pick up a piece of chalk and draw, contributing to an ever-changing communal collaboration. The lower-left drawer opens to reveal a deep, glass-topped display case containing many artifacts including a book galley, photographs, eyeglasses and Pekar’s AARP card. 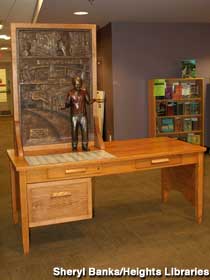 Until his death in 2010, Pekar was a devoted denizen of this particular library. Although best-known for his autobiographical work (American Splendor was adapted as an award-winning feature film in 2003, starring Paul Giamatti), Pekar also penned non-fiction titles on subjects ranging from Beat poets to 1960s counterculture to his complicated feelings about the state of Israel. This library was essential to his bottomless thirst for research.

Pekar’s widow, Joyce Brabner, raised over $38,000 via Kickstarter to fund the creation of the memorial. She even threw her wedding band into the molten metal used to cast the figure of her husband.

Instead of a looming outdoor sculpture, the Pekar tribute is a modest-size participatory spot intended to inspire creativity. On top of that, October also marked the launch of a limited edition Harvey Pekar library card by the Cleveland Public Library. It reproduces a panel from the posthumously published Harvey Pekar’s Cleveland: an illustration by Joe Remnant that depicts Pekar approaching the entrance of the main library. It’s an honor appropriate for a book-boosting mensch master of the comics form.

As Brabner said at the dedication ceremony, in their family “a library card is a lot more important than a charge card.”

2345 Lee Rd, Cleveland Heights, OH
Directions:
Cleveland Heights-University Heights Library. East of Cleveland in Cleveland Heights. On the east side of Lee Rd, about a miles south of US Hwy 322, or two miles north of US Hwy 422. The Pekar memorial is on the second floor.
Hours:
M-F 9-9, Sa 9-5:30, Su 1-5 (Call to verify) Local health policies may affect hours and access.
Phone:
216-932-3600
Admission:
Free