« From the Fossil Record: Who Was a Little Snot? | Main | War-Cracked Earth, Ready for Visitors »

As the pace of Coney Island’s much touted “revitalization” has accelerated in recent months, many beloved landmarks, historic buildings and mom-and-pop businesses have become casualties of plans to modernize the “amusement core” and transform it into a year-round (and far more mainstream) tourist destination. 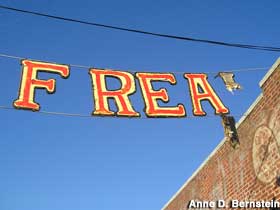 Luna Park operator Zamperla USA (the parent company is based in Italy) was chosen by the city to be the new landlord for a long stretch of boardwalk businesses. After asking the existing tenants for proposals, Zamperla offered new leases to two survivors: corporate chain Nathan’s and funky T-shirt entrepreneur Dianna Carlin of Lola Staar Boutique. The others were left out in the windswept cold. 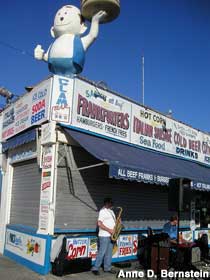 The building that houses Ruby’s opened as a Hebrew National Deli and Bar in 1934. Ruby Jacobs (who grew up in the area and already owned a number of bathhouses) took over in the 1970’s and his daughters Cindy and Melody (along with Melody’s husband Mike Sarrel) have been presiding over its quirky charms ever since their dad passed away ten years ago. The walls are lined with hundreds of fading photographs of amusements past and present. (And in the days before the city built new municipal bathhouses, it was one of the few places offering desperately-needed “facilities”—for customers only, of course!)

Paul Georgoulakos, now 81, opened his nosh mecca Gregory and Paul’s in 1962. (His friend Gregory ran a similar venue across from the Cyclone.) Eventually he passed managerial responsibility on to his daughter, Tina. For many years, the 18-foot long, 14,000-pound Astroland Rocket was mounted on the roof, until it was donated to the city by Astroland’s Albert family when they lost their lease in 2008. It is currently in storage in Staten Island; the city has promised that it will be returned to Coney Island sometime in the vague future. Now Tina is trying to figure out what to do with the stand’s other iconic sculptures, known as “Mama and Papa Burger”. The proud patty pair will most likely be removed and possibly undergo makeovers—but with home ownership flipping, who knows where they will end up? 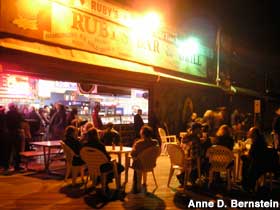 Some of the businesses (including Ruby’s) have vowed to fight and have banded together to hire a lawyer. Paul’s Daughter threw a thank you party and massive food give-a-way on November 13. Ruby’s has hosted multiple “last call” fundraising weekends and encourages fans to sign their online petition.

Off the Boardwalk, Joe Sitt of Thor Equities is doing his best to quickly demolish four of Coney’s few remaining historic buildings including the Bank of Coney island and the Henderson Building. (This is where Harpo Marx made his debut in 1899. It later housed the excessively gruesome World of Wax Museum).

The non-operational but nicely refurbished Parachute Jump isn’t going anywhere; it’s landmarked, along with The Cyclone and The Wonder Wheel. And Coney Island USA (home of the Freak Show) owns its building. But aside from these historic reminders of Coney past, it seems that there is little room in the new Coney for the kind of rough-edged weirdness that has made the resort so memorable for so long.

(Ruby’s is slated to be demolished and replaced with a sports bar. Of course.) [Post by Anne D. Bernstein]