The scope and scale of the National Museum of Funeral History in Houston, Texas, has always been a killer. But it’s about to top itself with the December 2 unveiling of “Celebrating the Lives and Deaths of the Popes,” a $2 million permanent exhibit that will allow visitors to attend a papal funeral. It’s so big that the museum has had to build an addition to house it. 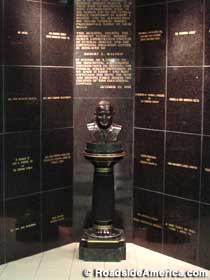 This is supposedly the only display of papal artifacts outside of the Vatican, although we know of at least one exception. It includes a Popemobile and a full-scale, walk-in replica of Pope John Paul II’s crypt. The pontiff lies in his spare funeral vestments — donated by his personal tailor — in an exact duplicate of his casket. “To get this coffin in here, it took eight people and a forklift,” said Bob Boetticher, president of the museum, in the Houston Chronicle.

The ability to see dead Catholic superstars stateside is nothing new. But this postmortem display appears to outrank anything previously available.

Sections: Attraction News Comments Off on Dead Pope Is Installed In Funeral Museum