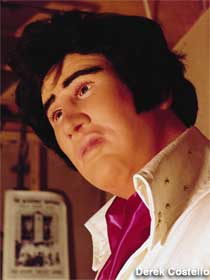 You may not know Derek Costello, but if you’ve been to Niagara Falls you probably know his work. His prehistoric beasts are at Dinosaur Park Mini Golf. His wax celebrities are at Movieland. His historical figures are at the Niagara Wax Museum of History. His ghouls are at Castle Dracula and the Haunted House of Wax.

He’s also the artist behind the giant stainless steel water molecule outside Niagara Falls City Hall, built in 1967 when he was a city employee.

He drives around town in an electric car of his own design. 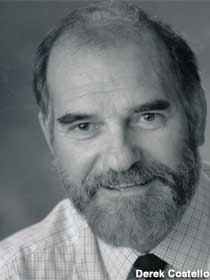 “It’s a strange, strange business,” said Derek of his work sculpting famous people (and monsters). “You can never think you’re good,” he said. “One person looks at what you’ve done and says, ‘That’s wonderful!’ The next person looks at it and says, ‘Who’s that?'”

Part of the fun of visiting a wax museum is the right to critique the dummies of the famous, people that everyone knows (or thinks they do). Call it crowdsourcing or Tyranny of the Masses — Derek, who’s been in the business for over 50 years, understands it. But it doesn’t make his job any easier.

He once built a display for the film The Longest Yard starring Burt Reynolds, whose character was clean-shaven. “Nobody liked him,” said Derek. The museum owner made Derek put a mustache on Burt. “Then everybody loved him.” 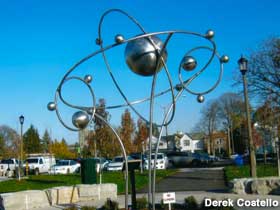 The amount of labor involved, and the anonymity of the job, has made it difficult for Derek to find apprentices. “They’ve all either failed, died, or quit,” he said. “I don’t blame them. It’s a massive amount of work. It’s not as grandiose as doing famous artwork, even though the work has to be done as accurately and properly.”

(In a testament to Derek’s skill, the owner of the Niagara Wax Museum of History told us that Derek’s dummy of Marilyn Monroe had to be removed because too many people were groping it.) 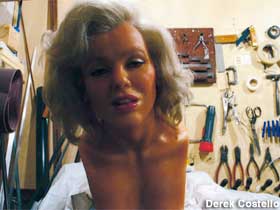 Derek told us that one of his unexpected side jobs is to track down old, retired celebrity dummies for resale, often to private collectors.

“These are wealthy people with these huge homes, and they’ve got them decorated with these figures,” said Derek. “They send me photos! They talk about them like they’re members of the family. It’s absolutely insane.”

“I don’t know how many times I’ve done E.T., Darth Vader, C3PO,” Derek said. “God knows where they all are now; I don’t think there are any in Niagara Falls any more. Somebody’s got them in their back yard or at the foot of their bed. Unbelievable.”