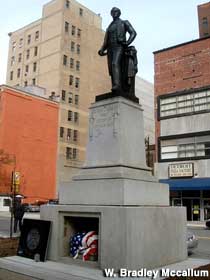 How do you make certain you won’t lose the corpse of an important historic person? In Detroit, the practical answer is to bury it in the base of that person’s statue.

The corpse in question is of Stevens T. Mason, who accomplished a lot at a young age. Governor of Michigan at 22, tarnished ex-governor of Michigan at 27, dead at 31 — Mason reportedly punched the reporter who dubbed him “Boy Governor,” and was ready to go to war to grab part of Ohio before Congress gave him the Upper Peninsula as a consolation prize (this was in 1836).

Mason wouldn’t stay still even after he was dead. He was buried in New York City, then was exhumed and reburied in downtown Detroit, supposedly on the spot once occupied by his governor’s office. A statue of Mason was later placed atop the grave, then moved to make way for a bus depot, and the workers apparently forgot to move the body.

When the statue was moved again this past June, Mason was nowhere to be found. Frantic digging eventually rediscovered his casket, and Mason was re-interred yet again — this time in the base of his statue, which was extended upward to allow for an above-ground crypt, like a one-car garage under a condo. 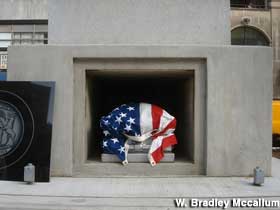 It’s a tidy solution for statue-worthy celebrities, who’d probably rest easier in a popular park, under their immortal likenesses, than in some out-of-the-way churchyard.

Ghost hunters would be happy, too, with quicker access to mini-mart snacks and batteries to fuel their all-night vigils. Tourists would get two destinations in one spot — and it would forever end the messy disputes over where so-and-so’s bones are really buried. For conspiracy theorists, the remains could be easily slid out — like a morgue drawer — scientifically verified, and lightly dusted.

Statue and Tomb of the Boy Governor

Griswold St., Detroit, MI
Directions:
Downtown, in tiny triangular Capitol Park, on the west side of Griswold St. just north of State St. One block north of US 12/Michigan Ave. and one block west of Hwy 1 Woodward Ave.

One Response to “Detroit’s Historic Dead – Look Under Their Statues”