« God Fingers: Claw Inspiring | Main | Harvey Was A Boat Before He Was A Rabbit »

Crime cannot escape the long arm of the law, so comic strip supercop Dick Tracy should be at home everywhere.

However, unless the world has become a wide open sewer of copyright burglars and brand ‘nappers, that’s unlikely. Dick Tracy needs a legit base of operations. And that base has now become Naperville, Illinois, the deal sealed with a new nine-foot-tall bronze statue of the famous crime fighter. 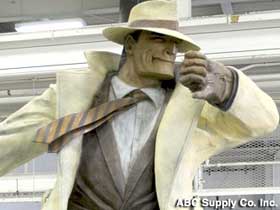 Dick Tracy began as a comic strip in 1931, drawn by Chester Gould. There’s a big Dick Tracy mural in Gould’s childhood home town of Pawnee, Oklahoma, and for years there was a Dick Tracy Museum in Gould’s adult home town of Woodstock, Illinois. But Gould died in 1985 and Woodstock eventually closed the museum, abandoning Tracy for a hotter pop culture phenomenon.

Dick Tracy, however, survived. The comic strip was turned over to Gould’s assistant, Dick Locher, and he lives in Naperville. He had made a small wax statue of Tracy, and when he showed it to a local civic booster, the idea for the statue was born.

The statue shows the square-jawed detective talking into his two-way wrist radio, his signature yellow coat and a red tie flapping as he runs to solve a crime. It was made by sculptor Don Reed, who is also responsible for another Illinois superhero statue, the Ronald Reagan on horseback in Dixon.

The Dick Tracy exhibits from Woodstock are now in storage. But the Gould family reportedly likes the new statue, and there’s talk that the museum may someday reopen in Naperville. The statue, however, isn’t going anywhere. It’s lit at night, with a security camera trained squarely on it, and the famous flatfoot’s shoes are anchored into the ground with four-foot-long steel rods.

Naperville Riverwalk, Naperville, IL
Directions:
From I-355, about a mile south of its junction with I-88, exit onto Maple Ave. Drive west for five miles as Maple Ave. becomes Chicago Ave. The road ends at Main St. in Naperville. Turn left, then immediately turn right onto Water St. Drive one block and park. The statue will be on the right, along the Naperville Riverwalk, next to the red brick township offices building and the covered bridge over the river.
Admission:
Free
RA Rates:
Worth a Detour