« Sign Of The Apocalypse? Mr. Slime Is Art | Main | Arm of the Unknown Soldier: A Friendly Wave »

Washcloth At The Ready, Don Aslett Opens His Museum Of Clean 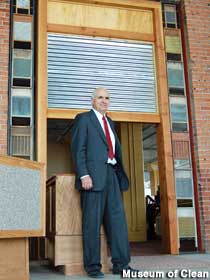 “I’m trying to give clean its rightful place in society,” said Don Aslett, whose name graces the Museum of Clean in Pocatello, Idaho. Aslett, who owns a multinational cleaning business, has spent six years and $6 million of his own money to open the museum in a 80,000-square-foot, six story building in his hometown.

It began, he said, in 1984, when he noticed an old hand-pumped vacuum cleaner at The Henry Ford museum in Dearborn, Michigan. “I thought, you know, there’s cow museums and hammer museums and button museums, but what is more important on the face of the earth than clean?” Aslett started collecting cleaning items; he estimates that he now has 500 to 600 vacuums and more than 6,500 artifacts.

Aslett, however, wants everyone to know that the Museum of Clean is not a vacuum museum — even though it does display dozens of his favorites. 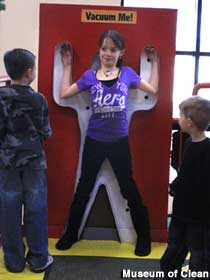 “The whole thing is designed to sell the value of clean,” Aslett said, explaining that cleanliness has, for too long, been portrayed as unpleasant. “We punish our kids by making them clean their room,” he said. “We tell them, ‘You’d better study, or you’ll grow up to be a janitor.'”

The Museum of Clean counters this with exhibits showing the benefits of learning to sweep, clean windows, and clean ourselves. A kid-size “Vacuum Me!” exhibit connects to a powerful motor in the basement. “That thing’ll suck the braces right out of your teeth,” said Aslett. A gallery of Cleaning Art — statues, sculptures, paintings, photographs — conveys Aslett’s belief that, “clean is the most beautiful thing on the earth.”

Aslett originally planned to have the Museum of Clean open in 2008. But his desire for perfection and his constant flow of new ideas has kept the museum not-quite-yet-ready for years. He finally conceded that “the museum is never finished” and opened it to the public with gaps — but what exists is nevertheless impressive. 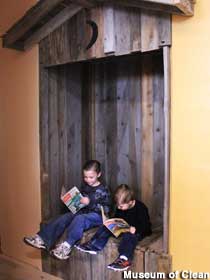 There’s a small-scale Noah’s Ark whose exhibits stress the importance of water in cleaning. A giant walk-thru trash can visually expresses the 1,600 pounds of garbage thrown away by the typical American every year. A “clutter” exhibit conveys Aslett’s belief that “visual disorder causes depression.”

One item, a dead armadillo handbag with a zipper in the stomach, intrigued Aslett so much that he offered its owner $500 or a trip to his home in Hawaii. She wouldn’t sell; Aslett eventually found a replacement in Mexico.

The museum’s tower, the highest point in Pocatello, has a clock that Aslett is programming to flush like a toilet on the hour. A resident wrote to complain, Aslett said, “and I said, ‘That’s nothing, lady, on the half-hour it’s gonna tinkle.'”

The Museum of Clean displays an “Adopt-a-Highway” sign that Aslett has re-lettered to read, “Adopt-a-Habit.” “Adopt-a-Highway is the stupidest thing we’ve ever done,” said Aslett, who also feels that high schools should be cleaned by their own students. “If you clean up after people, you reinforce bad behavior,” he said. “The most important thing you can teach someone is to be responsible for their own mess.”

Sections: Attraction News, Tourism News Comments Off on Washcloth At The Ready, Don Aslett Opens His Museum Of Clean