Dust Up At The Action Figure Museum 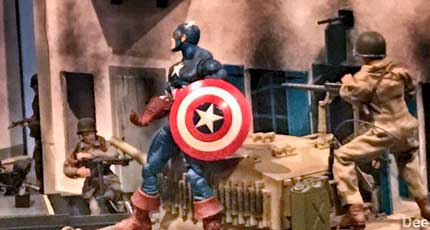 How do you clean a collection of over 13,000 toys and action figures?

At the Toy and Action Figure Museum, it’s a matter of logistics.

“Over the years I’ve developed a system,” said museum founder and curator Kevin Stark. Every February he closes the museum for several days so its toys can be cleansed of a year’s worth of tracked-in dust and visitor off-gassing.

In the “Adult Collector’s Bedroom Diorama,” for example, volunteers break the display into two-foot-square grids, pile all the toys from a grid onto similar-size pieces of cardboard, carry them to a cleaning area, clean the toys, then move them to staging area to either be returned to the display or rotated into storage.

“The big thing is, you don’t want to lose the accessories,” Kevin said. “I know where every piece belongs, but I really don’t want to have to match all this stuff back up if I don’t have to.”

Kevin called his knowledge of every action figure tool and weapon “part of my wealth of useless information.” 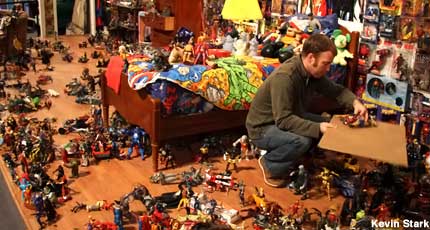 For the cleaning, Kevin stressed the importance of texture. “Smooth, hard plastic toys are easy to get with just a duster,” he said. “Some toys are more rubbery; you gotta hit those with glass cleaner – but you have to be careful not to use anything wet on toys with paper stickers. Small toys you usually have to clean with cotton swabs to get in all the nooks and crannies.”

Toys are meant to be played with, and a rookie cleaner might assume that a piece of plastic or metal could survive a quick, vigorous scrubbing. Kevin, who trains all the volunteers, quickly instructs them to forget such ideas. “When I start telling them the value of some of the toys,” he said, “they get a lot more careful.”

We told Kevin about the Don Aslett Museum of Clean in Idaho, a museum known for its spotless surfaces and dust-free organization. Kevin was initially intrigued, but eventually conceded that Don Aslett “would probably think our place is a nightmare.”

Plus, Kevin added, the yearly cleaning gives him an excuse to play with the toys.

The dates for the cleaning this year are February 21-23. 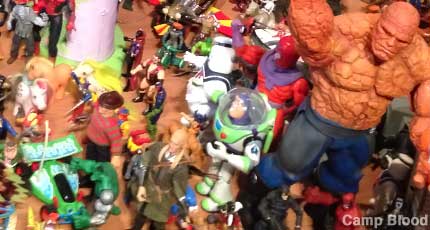 Sections: Attraction News Comments Off on Dust Up At The Action Figure Museum