« Souvenirs: The Terror of Tiny Towns | Main | Ft. Worth: Last Supper Wax Back » 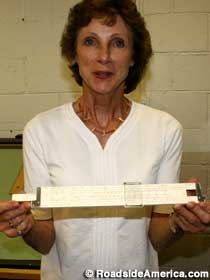 Scientist Enrico Fermi was a superstar of nuclear physics. He was the genius who helped to build the first atomic pile in 1939, and who later oversaw the construction of the B Reactor outside of Richland, Washington.

On a recent tour of the reactor, we were shown Fermi’s office, which displays a 1944-model slide rule. Michele Gerber, the reactor’s historian, told us that “Fermi would have used a slide rule exactly like this” to calculate the stacking of the reactor’s graphite core, or the maximum amount of uranium that could be shoved into it without exploding. She cautioned that “it’s not his, but one like it,” but maybe she just has to say that. 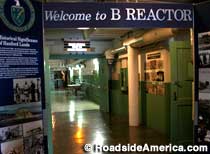 A slide rule touched by Fermi — an extension of his brain — would be a powerful totem in the wrong hands. But whether or not this particular slide rule fits that description, its safety seems secure. Thieves would have a hard time escaping the reactor’s paramilitary patrols, or crossing the miles of desert that surround it without falling into a radioactive sludge pit or being killed by a rattlesnake.

Sections: Places Comments Off on B Reactor’s Slide Rule: Touched By Fermi?

US Dept of Energy Reservation Rd, Hanford Nuclear Reservation, WA
Directions:
B Reactor is a half-mile south of the Columbia River on Hwy 24, then four miles east on a government access road. But you can't drive there. Instead, go to www.hanford.gov, click on "Site Tours," and reserve seats (two maximum) for the bus tour, which lasts up to five hours. No security clearance is needed for the B Reactor tour, but it's required for the longer Hanford Site tour. Tours are forbidden to children under 18 and non-U.S. citizens. You must wear pants, a shirt with sleeves, and closed-toe shoes. Tours depart from the Volpentest HAMMER Training and Education Center, 2890 Horn Rapids Rd, Richland, WA.
Hours:
Tours by advance reservation, April through September. No children. Local health policies may affect hours and access.
RA Rates:
Major Fun

More on Historic Nuclear B Reactor