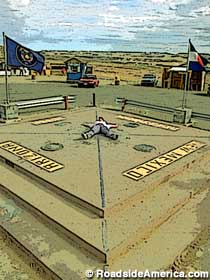 You can’t stand in Arizona, Colorado, New Mexico, and Utah at one time any more — at least not until June 1, 2010. That’s when the barriers will come down and the new Four Corners Monument is scheduled to re-open to the public, eager to participate in America’s most famous photo-op.

“It’s not deteriorating. It’s just inadequate,” said Cleal Bradford, executive director of the Four Corners Heritage Council. Plans have been in place to upgrade the monument since 1995, and a token groundbreaking was even held in 2006. But Cleal said that disputes between the Navajo and Ute (who own various quadrants of the monument) kept the project in limbo until now.

We asked Cleal if the new monument has anything to do with rumors that the old Four Corners is in the wrong spot — miles wrong, according to some reports. “That was never the thought,” he answered, and assured us that three different Bureau of Land Management survey teams have “confirmed that it’s in the right place.” When the new monument is zeroed in, he said, “we’ve invited a BLM survey team to come back and make sure it gets in the right spot.”

According to Cleal, the problem with the old monument wasn’t its location, but that it wasn’t photo-friendly enough. Shutterbugs had to perch on unsteady, improvised high points to get snapshots of people splayed across four different states.

The new monument plaza, according to Cleal, will be sunk eight feet into the ground. Raised viewing platforms will jut out at the four compass points “so that everyone gets a chance to be facing home.” It sounds similar in design to the Center of the Nation monument in Belle Fourche, South Dakota, although the sunken plaza and elevated snapshot spots set a new standard in geographic photo-op design. When we told that to Cleal, he seemed pleased.

“The Indian people don’t move fast, but they usually move in the right direction,” he said. “We think it’s gonna be a beautiful spot.”