Frozen North In The Nevada Desert?

A wealthy and well-connected businessman from Alaska wants his state to give him $4 million to start an “Alaska Adventure Center” in Las Vegas. 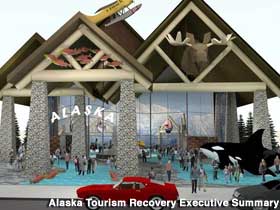 The $4 million, explained Perry Green to the Anchorage Daily News, will merely get the project “designed and all ready to go.” He would then approach the Alaska legislature with a formal plan for the “first phase,” as well as a request for more money. How much more money? Millions more, suggested the project’s developer. “It can’t be done on the cheap.”

The Alaska Adventure Center would entice people to visit Alaska (kind of like an old-fashioned World’s Fair pavilion). Green wants it on the Las Vegas Strip, where lots of people will walk past. The Center would have a high-def theater, two nightly live Alaska-themed shows, shops selling Alaska goods, a restaurant serving Alaska food (No mention of a subwoofer Alaska Earthquake thrill ride — yet). The concept illustration released by the developer shows an oversized rustic-looking chalet decorated with a polar bear, killer whale, bush pilot airplane, and giant moose head. Even in Las Vegas, it would draw eyeballs.

According to Green, Las Vegas is the perfect place for the Center since Las Vegas visitors like to travel and have disposable income. And now is the time to build it because Las Vegas real estate prices have dropped in recent years.

The Center, as currently envisioned, would not have gambling, although Green was once a runner-up in the World Series of Poker, which is held in Las Vegas.

One Response to “Frozen North In The Nevada Desert?”