Ft. Worth: Last Supper Wax Back

For a dozen years a life-size wax version of The Last Supper has languished in a Texas closet, the heads of Jesus and his disciples stored in boxes. Delays kept it there despite promises of its return in 2005 and 2007 and 2008. 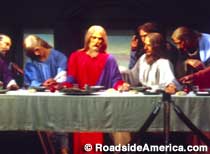 We last saw this Last Supper some time before 1997, when its then-sponsoring group ran into money trouble and packed it away.

The Supper was built under the supervision of mother-daughter wax artists Katherine and Katherine Marie Stubergh. In 1955, Ft. Worth oil tycoon Bill Fleming saw an earlier Wax Supper that the Stuberghs had built — which is still on display in Santa Cruz, California — and paid them to build a duplicate as a “gift to all Christians.” He displayed it for years at a Ft. Worth shopping mall. According to Ed Malone of the Ft Worth Christian Arts Commission, the Stuberghs built four addition Wax Suppers — maybe for four other tycoons? — but these have all since disappeared.

Daughter Katherine Marie, perhaps ready for a change of subject matter, opened up a Presidential wax attraction in South Dakota. But she and her mother both died years ago, so the Christian Arts Museum had to hire an artist from a wax museum in nearby Grand Prairie (but not this wax museum in Grand Prairie) to perform touch-ups on the figures

“They held up real well,” Ed told us. “Maybe one or two hairs were missing.”

The modern trend in wax museums is to allow visitors to mingle with their wax heroes. Ed, however, said that Jesus and the gang will be safely roped-off from adoring fans, and allowed to enjoy their divine dinner in peace.

One Response to “Ft. Worth: Last Supper Wax Back”