We’ve long been impressed with Jordan’s Furniture stores in Massachusetts, which offer mad mixes of water shows and Mardi Gras and thrill rides in places that sell, basically, furniture. 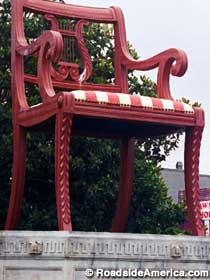 They seemed like unique extremes in the world of house-outfitting retail, which had already produced a giant chest of drawers that seemed, by comparison, more of a throwback to an era when a big chair was enough to assure marketing success.

But maybe Jordan’s Furniture isn’t so unique after all. Maybe there’s something about selling furniture — some wood beetle that burrows into the brain, perhaps — that drives owners to gaze over the pier wall into a demented furniturescape.

Take the Canadian firm of Leon’s Furniture Limited. That company has just unveiled “Leon’s Living Room” in Welland, Ontario, a life-sized outdoor bronze sculpture of a couch, two chairs, a coffee table, and a seated company founder Ablan Leon, with whom “residents and visitors are invited to interact,” according to a company press release.

Extreme for Canada? Stranger still is news from Houston, Texas, where Gallery Furniture recently had its warehouse and showroom destroyed in a very mysterious $20 million arson fire. Its owner, Jim McIngvale, was already in the news for boycotting his taxes, and has refused to hire a lawyer because “I would rather cut off my arms than destroy my life’s work” and has said that the showroom’s reopening “will be a triumph of good over evil.”

As part of that reopening, McIngvale has announced — through his Twitter account — that he has hired an artist to “make a sculpture from remnants of the warehouse,” which will be unveiled on July 4.

We hope that it’s something odd, or at least as big as the giant chest of drawers.