Gemini Giant Can Be Yours For A Giant Price

One of the spaciest of all Muffler Men is for sale — but it has a significant catch. 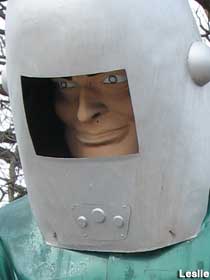 The helmet-wearing, rocket-cradling Gemini Giant has stood beside Route 66 since the mid-1960s, an icon of Illinois and memorable Space Age mascot of the Launching Pad Drive-In.

Launching Pad owner Morey Szczecin wants to sell the Giant and retire — and there’s the catch. The Gemini Giant is for sale, but the buyer only gets it if he or she buys the drive-in as well.

The Launching Pad paid $3,500 for the Giant when brand new. The cost for an average used Muffler Man nowadays is around $10,000. The price for the Gemini Giant, a unique, celebrity Muffler Man, would be much higher — but not as high as the asking price for the Launching Pad, which was last reported as $650,000. That amount may be reasonable for a Route 66 drive-in, but it’s a lot of moola for a 20-foot-tall fiberglass man, even one with a Buck Rogers-era helmet on his head.

We spoke with John Moauro, the realtor for the property, who said that he and Morey have been “trying to find someone willing to continue the legacy of the Launching Pad” in whatever deal they put together. “I’ve had a zillion phone calls asking, ‘Will he sell the spaceman?'” said John. “And I say, ‘No, he’s not gonna give up the spaceman. Not unless you want to pay the price for the whole place. Then you can have the spaceman.'”

So — anyone interested in just acquiring the Gemini Giant for their own business or private collection is out of luck. But anyone who wants to own one of the most celebrated beaneries on Route 66 (and get a super-cool retro Muffler Man as part if the deal) should please call John Moauro at 708-361-1150 ASAP.

Sections: Attraction News, Statues, Tourism News Comments Off on Gemini Giant Can Be Yours For A Giant Price