The Battle of Gettysburg saved American civilization from certain destruction. Now free Americans want to see the battle as they had done so for decades: at the Gettysburg National Military Park Museum and Visitor Center, on a big Electric Map.

Unfortunately, it’s gone — split asunder. Or, at least in storage. 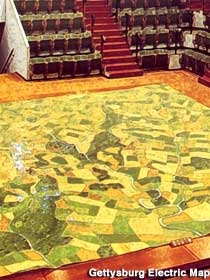 The map was a marvel of mid-20th century analog multimedia. Visitors would shuffle into a special 554-seat auditorium, stare down at a 30-foot-square Plaster of Paris rendering of the Gettysburg terrain, and be mesmerized as a sonorous narration told the story while hundreds of light bulbs winked off and on, showing troop movements.

But in 2008, the Battlefield’s management was turned over to a private group named the Gettysburg Foundation. They hated the map. They broke it apart and stuck it in a warehouse. Their two excuses for doing so were 1) that the map had asbestos insulation, and 2) that it was too big to fit into the new visitor center. Which, of course, they designed so that it would be too small to hold the hated Electric Map.

According to the York Daily Record, people who come to Gettysburg still ask to see the map. They’ve been doing it so consistently that the Foundation has announced that it may now bring back the map — as a video. The Foundation apparently filmed the map presentation one last time before they broke the map apart. Now a film is being created “based” on the presentation. It would be shown in the Visitor Center theater, although “there is no timetable for the film’s release.”