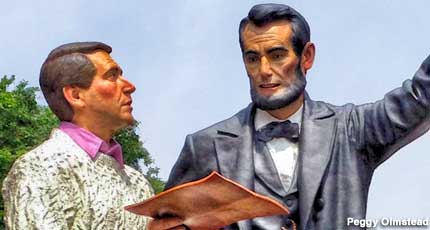 Built in 2014, a 25-foot-tall statue of Abe Lincoln and Perry Como has gradually made its way westward, from New Jersey to Ohio to Indiana. The latest destination for the towering duo is downtown Chicago, where they were erected on November 1, 2016, just in time for the presidential election.

The statue’s title, “Return Visit,” and its likeness of Pennsylvania white bread crooner Perry Como, have nothing to do with Chicago (or any of its previous locations) because it’s a giant copy of Seward Johnson’s life-size bronze in Gettysburg. Abe, returning from the 1860s to the almost-present, is gesturing toward the window there where he wrote the Gettysburg Address. Perry was a local boy who made good in the 1950s.

Chicagoans are being told that Perry is a generic “common man,” that Abe is merely explaining the Address to him, and that the statue is in Chicago to stress “honesty” in politics. None of those statements may be true, but Lincoln was from Illinois, and that’s probably all that most Chicagoans care about. That, and he’s 25 feet tall, which is honestly impressive.

200 N. Wilmor Rd, Washington, IL
Directions:
Northwest of downtown. From US-24 BUS/Peoria St. turn north at the stoplight onto N. Wilmor Rd. Drive two blocks. You'll see the statues on the left, next to the Fire Dept.
RA Rates:
Worth a Detour