Californian Builds His Own Giant Transformer 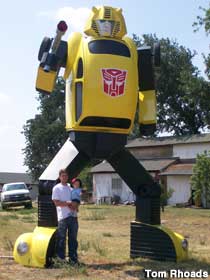 “When the Transformers movie came out, that’s when it really woke me up,” recalled Tom Rhoads.  “I said, ‘Man, I could build me one of those.  I’m gonna get me a bug and build one!'”

And that’s how Tom Rhoads’ parents ended up with a life-size “Bumblebee” Transformer robot in their yard.

Tom restores classic cars for a living in Lemoore, California.  He had the tools, skills, and the all-important robot-construction space next to his parents’ farm house.  “And I have some friends who are farmers,” he said.  “I raided their scrap piles for angle iron and I got the Volkswagen bug for free.  You can really do this cheap if you have friends and resources.”

Tom was inspired to build Bumblebee by the birth of his son, Drew, “so he could tell his friends, when he goes to school, that he has a real Transformer.”  Drew, however, is still only a year old, and is several years away from true Transformer appreciation. “He points at it and he gets excited when he sees it,” Tom said.  “And he kind of says, ‘Bumba-buh!’  He kind of gets it.”

We asked Tom if he had any construction tips for aspiring Transformer builders.  “They turn out to be a lot bigger than you expect,” he said.  “I thought it was gonna be small; it’s just a Volkswagen.  But by the time I got the legs on and the proportions right — the sucker’s 18 feet tall!” 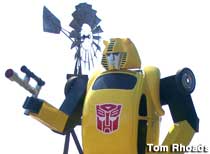 “And it balanced really well, surprisingly,” he added, “given my lack of math and engineering skills.”  To be safe, Tom has anchored his robot deep into the ground with thick steel rods.  “We get some pretty strong winds here, but I didn’t want cable ties,” he said.  “I thought that’d look kinda tacky.”

Tom said that Bumblebee is visible from a mile away across the flat farm fields, which is fine with him.  “I’ve been to Cadillac Ranch and I always thought it’d be really neat to have a landmark like that.  And now I do.”  Bumblebee can be seen from the highway, but Tom doesn’t mind if people come onto the farm as long as they’re respectful, drive slow, and are mindful of the children and the animals.  “I get to love Bumblebee every day,” he said, “but if somebody else can get a kick out of it, take some pictures and enjoy it, that’s just bonus.”

4 Responses to “Californian Builds His Own Giant Transformer”