« Fame! Too Much of it is Killing Fireman Statue | Main | Quantum Mechanics And Mr. Chicken »

Watch Gladiators, Flee The Minotaur, Then Buy A Pumpkin 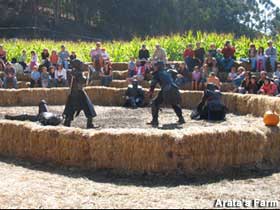 Chris Gounalakis wants to sell you a pumpkin. He knows how to do it, too. He’ll get you to come to his farm to watch the gladiator battles, or to be chased around its labyrinth by a live minotaur.

“Why would you drive 30, 100 miles from this place to go in the mud and pick a pumpkin? You can do that at Safeway,” said Gounalakis, whose Arata’s Farm occupies eight acres south of Half Moon Bay, California. “We’ve found a way to make farming fun.”

Gounalakis, who emigrated from Greece in 1969, built his farm’s first labyrinth in 2001. It’s grown in size and complexity every year, with turrets, arches, and seven-foot-high walls made of thousands of bales of hay. The live minotaur was a later addition (he roams the labyrinth on weekends) as were the gladiators, who arrived as swordfighters who just wanted to rent the maze for private battles. Gounalakis turned them into gladiators, built them a hay bale fighting pit, then replaced it with an elaborate hay mini-Coliseum. 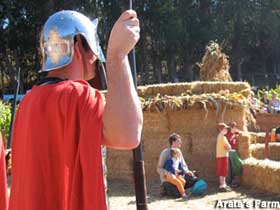 Other attractions have appeared on his farm as well, from the traditional hay rides and petting zoo to a miniature train and a haunted barn (admission is charged for some, like the labyrinth; others are free, like the gladiator battles). Gounalakis plants his pumpkins with corn to create a half-mile-long undulating “Pumpkin River,” visible from space.

Gounalakis is not the only farmer with a spectacular approach to pumpkin sales. And some people don’t like it. He recently had to appear before the county Agricultural Advisory Committee, which recommended that he be denied the permits that would allow him to operate as anything other than a traditional pumpkin farm. “They ought to be happy that we draw so many people out here,” said Gounalakis, who believes that “radical groups” are behind his opposition.

Gounalakis feels that he has enough local support to outweigh his foes and open for business in late June, as he does every year. And he won’t give up the gladiators or the labyrinth, which he says are instructive for children. “It’s based on education. I’m not gonna budge on that.”

Sections: Places Comments Off on Watch Gladiators, Flee The Minotaur, Then Buy A Pumpkin