This Saturday, October 27th, the Neon Museum in Las Vegas, Nevada officially opens to the public. The organization was founded back in 1996 and has been busy ever since, collecting and restoring neon signage rescued from casinos, motels, restaurants and sundry other businesses defunct or electronically updated. 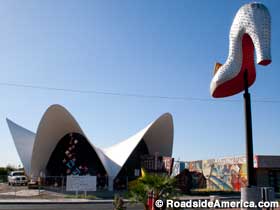 They’ve placed 16 examples (now in full working and blinking order) around town including the kicky Hacienda Horse and Rider and a high-heeled shoe from The Silver Slipper (more of a pump than a slipper, but let’s not quibble). These bright beacons of happy commercialism create an outdoor museum that’s open 24/7 and can be explored on a self-guided basis.

The group has also offered tours of its Neon Boneyard, where a collection of 150 signs in various stages of repair and disrepair are stored. But up until now reservations were hard to come by, the setting blisteringly hot and exposed, and visitors were warned in advance about the lack of “facilities”. With its official expansion complete there will be far more frequent tours (twelve per day, Monday through Saturday, with a ticket price of $15). But the most exciting addition to the Boneyard is a new Visitors Center with offices, a gift shop, reception area and (hooray!) bathrooms.

The main section of the Visitors Center was created within a relocated Mid-Century Modern motel lobby, which was cut into eight pieces and moved to its new home in 2006 (leaving behind the 5,000 rooms of the doomed La Concha Motel). The La Concha was designed by African-American architect Paul Revere Williams, who also created homes for Frank Sinatra, Lucille Ball and Zsa Zsa Gabor. The building is inspired by the shape of a seashell, offering a fittingly “Googie Style” welcome. 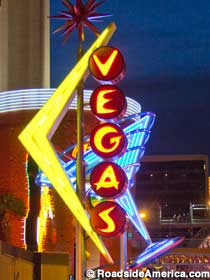 Tours last about 45 minutes and are led by a rotating lineup of volunteers; you never know who you might get…anyone from a lawyer to a showgirl. All guides use the signs as an opportunity to impart history and lore of the city’s heyday. The Neon Boneyard is also available for television, film and photo shoots as well as serving as a backdrop for wedding pictures.

It’s been a long haul for this museum with its challenging mission: trying to convince Las Vegans that their neon heritage is worth saving. Although the iconic “Welcome to Las Vegas, Nevada” sign is still in place at the south end of the Strip, many of the classic neon icons have been destroyed or junked, and replaced by LED and LCD displays that are easier to maintain and update. But they are hardly the gorgeous glowing masterpieces of yesteryear. We thank the founders of The Neon Museum for their foresight; it was a gamble worth taking.

More on Neon Museum - The Boneyard