“One down, one to go,” says Joe Taylor, curator of the Mount Blanco Fossil Museum in Crosbyton, Texas. He’s referring to the stuffed Chupacabra that’s now on exhibit in his museum. It was found in July 2009 in a small town outside of Houston, poisoned in a chicken house. 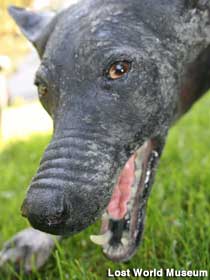 Chupacabra U.S.A. differs markedly from the other Chupacabra — the “one to go” that has yet to be stuffed and put in a museum — a monstrous South of the Border goat sucker with wings, glowing red eyes, and a human-like face. In contrast, Joe’s creature looks more like a hairless freak dog or coyote.

Joe insists that it’s neither, and that it may share its southern namesake’s trait of draining the blood of its victims.

“This thing’s teeth are different, and they could do some damage,” Joe said. “If one was slashing at your arms, you might lose enough blood that you couldn’t escape.” Joe has sent the frozen carcass of the beast to Baylor University for analysis. “I asked them to look for enzymes, to determine if there was an anticoagulant in the saliva.”

Joe’s Chupacabra is on loan to Crosbyton from the Lost World Museum in Phoenix, New York, which after years of delay will finally open to the public “sometime this July,” according to Joe. When it does, the goat-sucker will travel northeast to its new home.

“We’ve had a great time with it,” said Joe, who hopes to have the Chupacabra recognized as a new species. “People who’ve seen it don’t say, ‘Oh, that’s just an old dog.’ They say, ‘Wow, that’s pretty weird.'”

“There are so many people around here whose grandparents talked about the Chupacabra,” said Joe. “I thought it would be nice to have it here, so they could see that grandma and grandpa weren’t crazy.”