The 100-foot-long, 20-foot-tall, five-humped water monster floated in the Grand River in the fall of 2009, part of a Grand Rapids public art contest. It was built of styrofoam and wood, and designed as if Nessie had mated with a piece of Art Deco furniture. It had solar-powered glowing eyes. Inexplicably, Grand Rapids only awarded it 6th place in the competition. 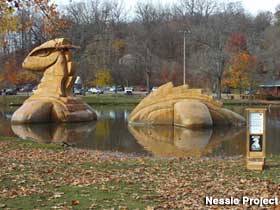 The disappointed monster-builders parked Nessie in a local pond while they pondered her fate. An attempted sale on eBay failed to find a buyer, but perhaps shamed the city into belated action. On May 14 it was announced that Nessie wouldn’t be sold or going anywhere, and instead would be permanently anchored in the city’s John Ball Zoological Garden pond.

Her creators are giving her a special hard-shell coating to help her withstand Grand Rapids weather. Nessie will be officially re-floated on May 21, 2010.

Directions:
On the west edge of downtown, in the John Ball Zoological Garden pond. I-196 exit 75. Drive east on Hwy 45/Lake Michigan Drive NW. The road quickly turns sharply right and becomes W. Fulton St.; follow it. The road then quickly veers left again, but you want to exit right into John Ball Zoo Park. You'll see the pond on the left (Note: Nessie is taken out of the water and placed on land during the frozen winter months).
Hours:
Nessie was removed in July 2018.
Status:
Gone