Bring Me The Hand Of Jerry Garcia

Jerry Garcia was one of those rare individuals who could be recognized without seeing his head. 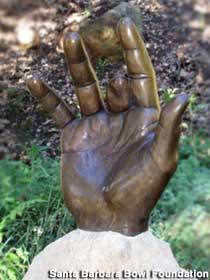 The leader of the Grateful Dead had a well-known beard and stoner smile, but among Deadheads he was instantly recognizable by his right hand, which was missing most of its middle finger. That appendage has now been immortalized, in bronze, three times life size, outside the Santa Barbara Bowl in southern California.

“I always wanted to do an art project of some sort around Jerry’s hand,” said Scott Brittingham, a fan of Garcia. “Something that Deadheads would appreciate.” Scott, whose foundation recently gave $1 million to the Bowl, had the leeway to do pretty much whatever he wanted, but felt that Jerry’s hand was “a far more creative thing to do than naming something for yourself.” 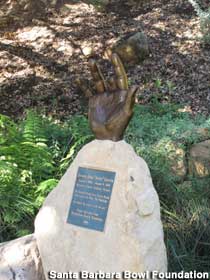 The hand is 18 inches tall and stands at face-level atop a rock in a wooded glen inside the gated entrance to the Bowl, where Garcia used to perform. A plaque lists the bands that Garcia played with, a quote from one of his songs, and describes him as a musician, painter, and “Cosmic Explorer.” According to Scott, the sculptor worked from several sources, including an x-ray of Garcia’s hand that he somehow had in his possession.

“It was a really cool attribute of his,” said Scott of Jerry’s hand, and we can imagine Deadheads staring at the Goliath-size appendage, lost in reverie. We asked Scott if he regarded the hallowed hand as something to be admired from a respectful distance, or would it be far freaking out if fans could leave offerings, as they do at the statue of Elvis in Hawaii? “If people want to leave some token of their appreciation,” said Scott, “that would be very Dead-like.”

The Immortal Hand of Jerry Garcia

1122 N. Milpas St., Santa Barbara, CA
Directions:
In the stone courtyard outside of the Santa Barbara Bowl. Usually only accessible during a concert, but if you call ahead you might be able to see it when there isn't a show.
Phone:
805-962-7411

2 Responses to “Bring Me The Hand Of Jerry Garcia”